A major and structuring issue for New Caledonia, the roll-out of optical fiber, which began in 2015 and aims to migrate all customers from copper to fiber at no additional cost to them, is gaining ground.

On this occasion, Yoann LECOURIEUX, President of the Board of Directors of OPT-NC and Vaimu'a MULIAVA vice-president, Christopher GYGES, Government Minister in charge of the digital economy, Eddie LECOURIEUX, Mayor of the City of Mont-Dore accompanied by Philippe GERVOLINO, Acting Director General of the OPT-NC and Auxence FAFIN, Deputy Director in charge of digital technologies at OPT-NC, celebrated the milestone this Tuesday, November 30, 2021 at the home of the client, located in Mont Dore Sud. 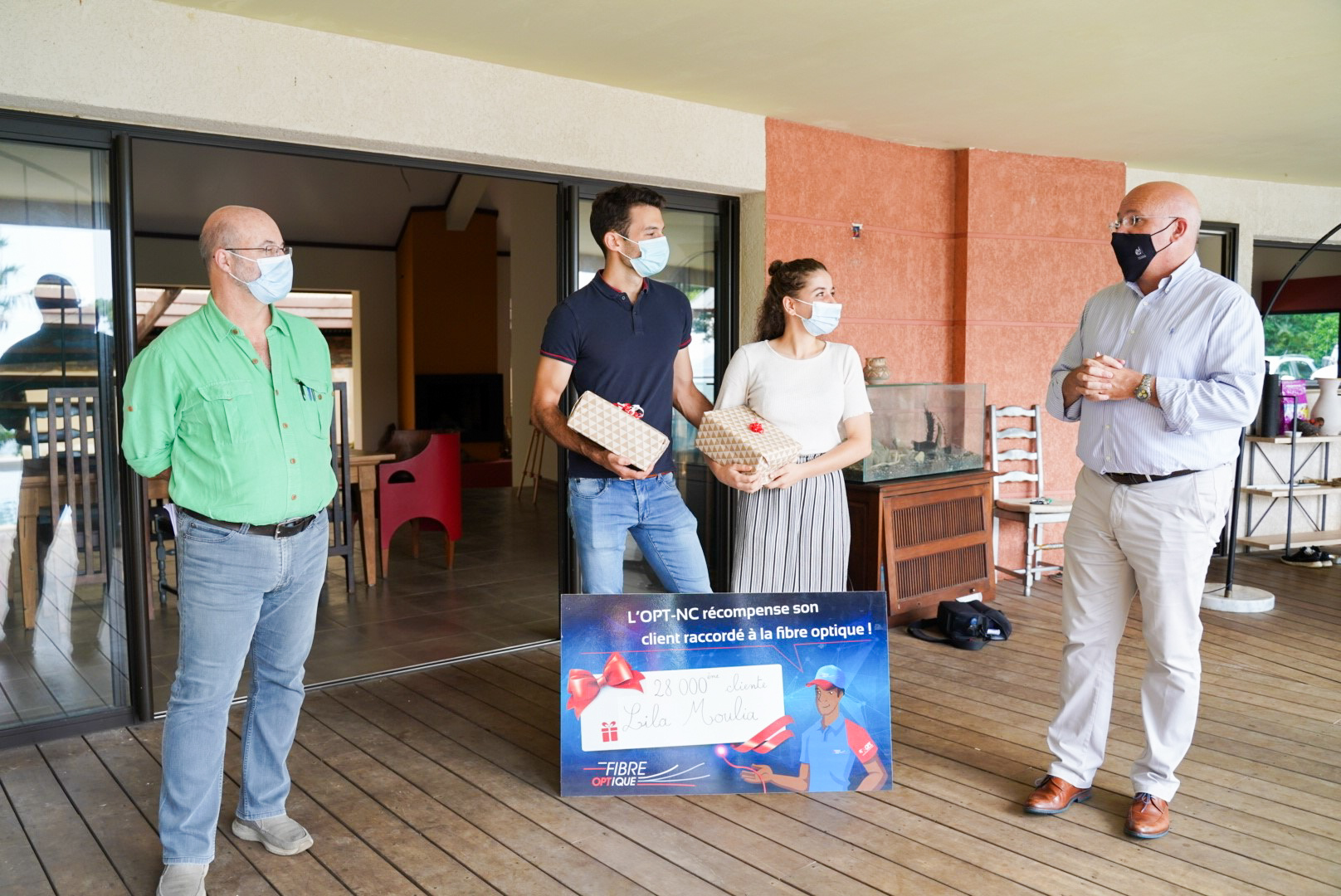 This event is all the more symbolic as the connection rate in the Mont Dore Sud area is 68%". To date, more than 4,000 customers have been connected to the fiber and more than 6,000 homes are connectable. With 94% of customers connected to fiber, the Boulari/Saint Michel area could be one of the first urban areas to be 100% connected to fiber.

The connection rate of the commune of Le Mont-Dore (excluding the recently opened Haut Robinson zone) is 80%; this is one of the best rates observed in all the municipalities currently covered by the roll-out of the optical fiber network. The Vallon Dore area, identified as one of the landing sites (the place where the cable exits the sea) of the project, will be one of the first areas to benefit from a secure Internet connection in August 2022.

Roll out of very high-speed fixed broadband in New Caledonia

Work on the deployment and connection of optical fiber continues throughout New Caledonia.

More info on the roll-out of the optic fiber network

’The OPT-NC connects its first fiber optic customers in KOUMAC

Initiated in 2015, the project aimed at connecting every New Caledonian to fiber optic is continuing to move forward. Indeed, technical teams connected the first optic fiber customers in Koumac and more precisely on the first connecting platform in the “South Koumac” area in early February 2020.

In early October, technical teams connected their 20 000th customer to the optic fiber network, a particularly noteworthy milestone for the major roll-out program as 2020 draws to a close. Therefore, the OPT-NC decided to celebrate this achievement at the lucky customer’s home on Wednesday 18 November 2020.

The technical teams have just connected the first customers to optical fiber on the Loyalty Islands and more specifically in Lifou. A symbolic moment in a major deployment program, which marks this year 2019.

Today, Wednesday 12 August 2020, an amendment to the existing partnership agreement between New Caledonia’s Postal and Telecommunications Service (OPT-NC) and the Postal and Telecommunications Services of the Islands of Wallis and Futuna (SPT-WF) was signed.  It translates into the first mission undertaken by a team from the OPT-NC to Wallis and Futuna to support SPT-WF’s initial roll-out of optic fiber on the island.

On Monday, December 17, Philippe Gervolino, General Manager of the OPT-NC and Louis-Jacques Vaillant, Director General of the SIC, signed a framework agreement to implement several lines of cooperation between the two entities in the perspective of achievement of their respective strategic plans.

The Board of the OPT-NC, chaired by Yoann Lecourieux, met on Tuesday 25 August 2020 at the OPT-NC’s Headquarters. Among the approved Deliberations and the notes that were presented were information regarding the very high speed wired and wireless internet roll-out strategies and changes in the offering in wired internet in New Caledonia.

Every year, comparison website Cable.co.uk, publishes a report comparing the speed of high-speed internet around the world. The 2020 ranking has just been published.

Yesterday, the Administrative Court (TANC) handed its ruling on the appeal submitted by SCCI against the Government Decree approving the new offerings granting access to the backbone network.

All news
All news